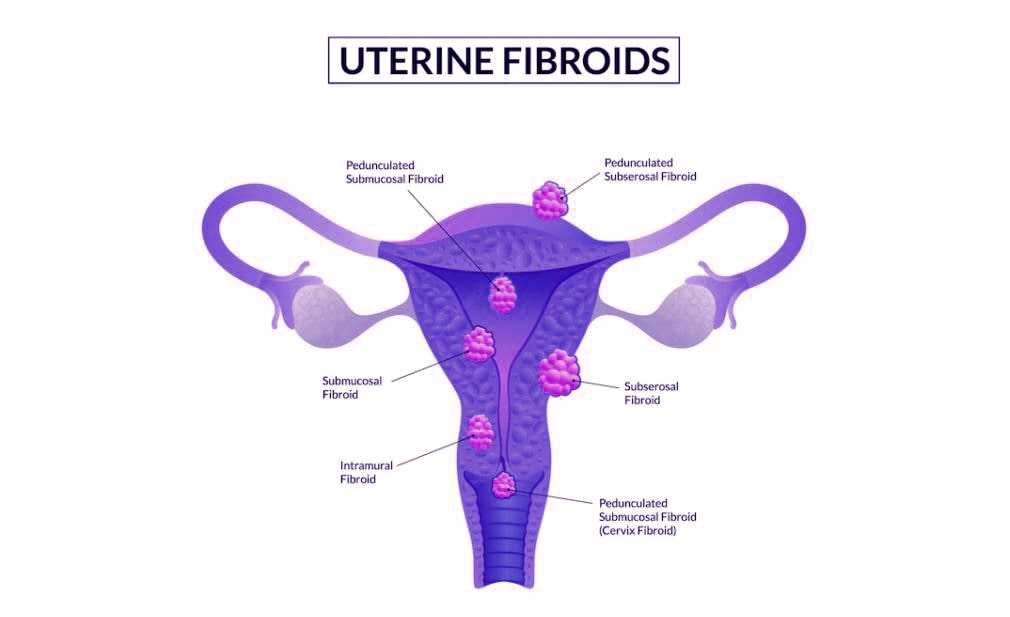 Uterine fibroids are noncancerous uterine growths that commonly appear during childbearing years and grow in and on your uterus. In your pelvis, your uterus is an upside-down pear-shaped organ. Your uterus should be around the size of a lemon. It's also known as the womb, and it's where a kid develops and grows during pregnancy. Uterine fibroids, also known as leiomyomas (lie-o-my-O-muhs) or myomas, are not associated with a higher risk of uterine cancer but almost never develop into cancer.

Uterine fibroids are commonly found by chance during a routine pelvic exam. Your doctor may notice irregularities in the shape of your uterus, which could indicate the presence of fibroids.

Fibroids do not always create symptoms, but when they do, they may cause

Treatment for uterine fibroids varies depending on their size, quantity, and location, as well as the symptoms they cause. Small fibroids rarely require treatment, while bigger fibroids may require medication or surgery.

Small fibroids can usually be ignored. Most women don't have any symptoms or concerns related to fibroids at all. Your fibroids will be continuously monitored throughout time, but there is no need to take action right away. Depending on the size and symptoms of your fibroid, your healthcare professional may recommend periodic pelvic exams and ultrasounds. Treatment is normally required if you are having symptoms from your fibroids, such as anemia from excessive bleeding, moderate to severe pain, infertility issues, or urinary tract and bowel problems.

Some of the Uterine Fibroid Medications are:

When discussing the many forms of fibroid removal surgeries, there are several aspects to consider. Not only may the size, location, and a number of fibroids affect the type of surgery performed, but your plans for future pregnancies can also play a role in deciding on a treatment plan. Some surgical procedures protect the uterus and allow you to conceive in the future, whereas others damage or remove the uterus.

Myomectomy is a technique that allows your doctor to remove fibroids from your uterus without hurting it. Myomectomy comes in a variety of forms. The type of operation that is appropriate for you will be determined by the location of your fibroids, their size, and the number of fibroids you have. The following are examples of myomectomy procedures for removing fibroids:

If pregnancy is desired, these treatments are not indicated, and there are surgical options to remove the uterus. These procedures can be quite effective, but they almost always result in the prevention of future births. Surgical procedures to eliminate fibroids include:

When it comes to Uterine Fibroids, who is at risk?

Several risk factors can increase your chances of acquiring fibroids. These may include the following: